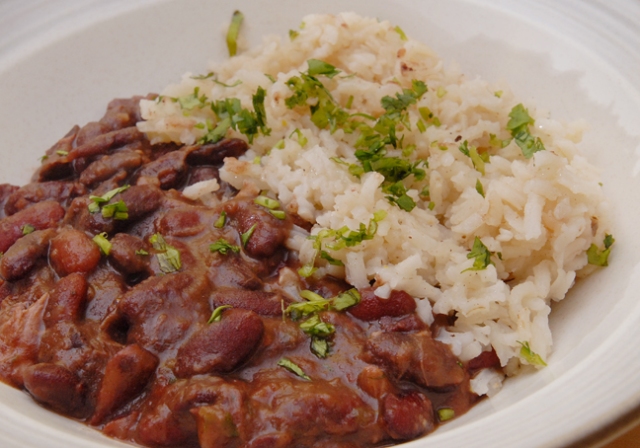 It needs a little more pork, like a rack of ribs or something

One of the quintessential Louisiana dishes we managed not to have on our trip to New Orleans a few months back was red beans and rice. So when we saw chef John Besh cooking up a big pot recently on television, we just had to have some. We’re following his technique if not his exact recipe. (He didn’t give precise measurements or we were too busy drooling to take notes. Also, he used bell peppers and we were plum out as I say, which makes Greg laugh.)

This is one of those dishes Louisianans are pretty picky about and like crab cakes where we grew up have very strong opinions about. On his show, Besh said he was even told his red beans and rice weren’t up to snuff right after Hurricane Katrina hit and he other volunteers were serving hurricane survivors. So if any of you bayou folks want to offer pointers, we’ll understand. Pull up a chair and break out the Tabasco. Also, feel free to bring some shrimp or nice Andouille.

Wash and soak beans for 4-6 hours or overnight. In a 6- to 8-quart stockpan, heat fat. Once melted and hot, throw in onions and let cook until tender stirring often, about 5-7 minutes. Throw in celery and cook until tender and water is released. Add salt and pepper to taste. Put ham hocks and beans in pot and stir to mix.  Add chicken stock and then enough water to cover the beans, with about two inches to spare. Bring to a boil. Cover and let simmer for about two hours. Beans should be tender and the mix pretty creamy and the ham hocks should be falling off the bone. Add cumin and hot sauce to taste. Serve the beans in a bowl with the rice in the middle, or on the side if you’re rebels like us. Garnish with chopped parsley or cilantro or green onions. Serve with extra hot sauce.

In a two-quart saucepan over medium heat, saute garlic in melted butter until tender, but not browned. Throw in rice and toss to coat, just a minute or so. Add salt and pepper to taste. Pour in chicken broth and bring to a boil. Cover and reduce to a simmer. Cook until tender, about 20 minutes.

This blog attempts to collect some of the things I try to create with food and booze. Sometimes I succeed and sometimes I fail. My hope is to entertain and maybe help people think a little harder about what they decide to eat and drink.
View all posts by Rufus' Food and Spirits Guide →
This entry was posted in Dinner, Food, Recipes, Rice/Risotto and tagged beans, creole, New Orleans, rice, southern. Bookmark the permalink.

49 Responses to Red beans and rice