How to Kill Three Hours in Richmond, Virginia 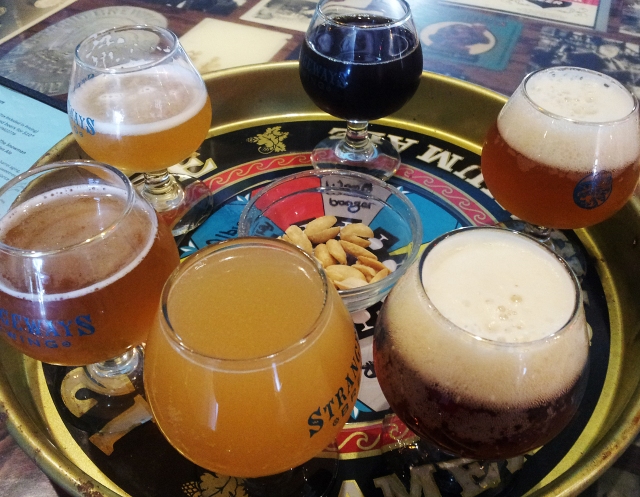 Flights of fancy at Strangeways

We headed back east last month for a family wedding and had three hours to kill before meeting up with family. We like to make the most of our time.

We started with a trip to Blue Bee Cider where some recipes came from the Virginia Historical Society and are almost as old as the country. (But not as old as Virginia, which by American standards is ancient.) We each had a flight and were impressed with the uniqueness of the offerings. We brought home a Mill Brace Bramble, a rose cider and a nice dessert cider called the Harvest ration. Blue Bee Cider bills itself as the state’s “first urban cidery” and is in downtown Richmond’s Old Manchester district near the James River.” Grab a late or early (we won’t judge) lunch around the corner at Camden’s Dogtown Market. Order the mussels with frites. Check out the wall of dogs and the wine selection while you’re there.

Then head over to Strangeways Brewing’s tasting room in a quiet little strip mall. They make a mean raddler, sell some cool T-shirts, and more importantly offer a great selection of suds that will leave you looking like this:

Beer makes you out of focus!

To learn more about Richmond’s burgeoning craft brewery scene go here. We were having too much fun to take any notes. Also, we left the good camera in the car so pardon the cell phone shots!

This blog attempts to collect some of the things I try to create with food and booze. Sometimes I succeed and sometimes I fail. My hope is to entertain and maybe help people think a little harder about what they decide to eat and drink.
View all posts by Rufus' Food and Spirits Guide →
This entry was posted in Food, Restaurants and tagged beer, breweries, cider, South, travel. Bookmark the permalink.

6 Responses to How to Kill Three Hours in Richmond, Virginia