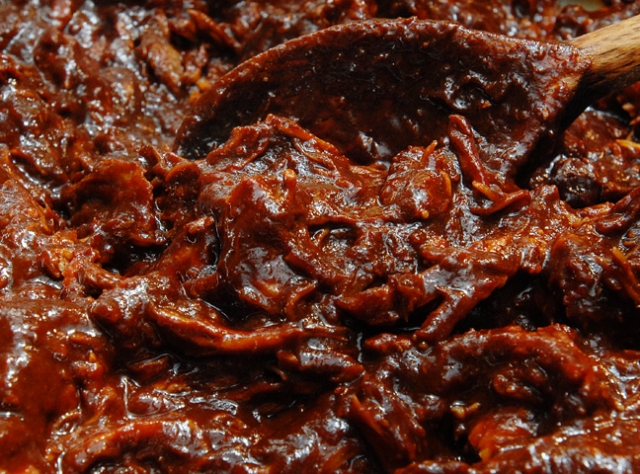 This is a very simple pepper sauce that requires a couple different dried peppers that may be hard to find at the grocery store. A trip to a Mexican market is always fun though.

Although this is usually used for tamales it would work equally well in many stewed meats for tacos, burritos or other Mexican meals.

This is not fully authentic due to the fact I use shortening instead of lard. This makes roughly four cups finished sauce depending on the size of the peppers.

Place dried chilies on a baking sheet and place in an oven at 350 degrees. Roast peppers for 3-5 minutes until they begin to smell sweet, do not burn them. Remove from oven and place in a large bowl. Cover with four cups boiling water and let soak until water has cooled, about 45 minutes. Meanwhile crush cumin seeds with sea salt to a fine powder. Place ground spice, garlic and peppers in a blender with 2 1/2 cups of the soaking liquid and blend to a smooth sauce adding more soaking liquid if needed. In a large saute pan melt shorting over medium heat and add flour. Mix until flour dissolves and begins to turn light brown then pour in blended chilies and bring to a simmer. Simmer sauce on low for 10 minutes, adding a little more soaking liquid if needed until thick and smooth. Sauce can now be refrigerated forever or used in any number of things.

This blog attempts to collect some of the things I try to create with food and booze. Sometimes I succeed and sometimes I fail. My hope is to entertain and maybe help people think a little harder about what they decide to eat and drink.
View all posts by Rufus' Food and Spirits Guide →
This entry was posted in Food, Mexican, Recipes and tagged chili, mexican, peppers, sauces. Bookmark the permalink.