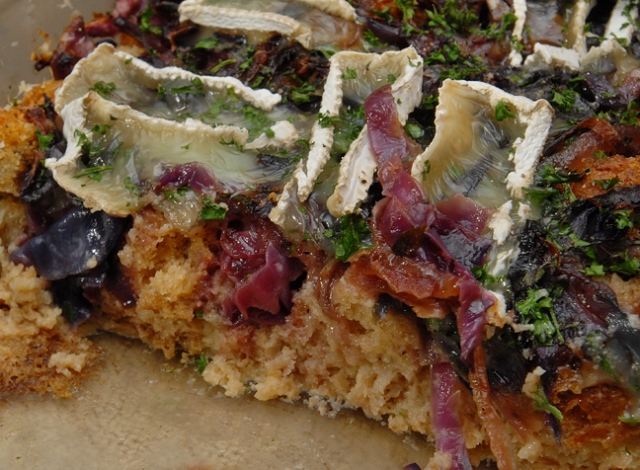 This is called a guts shot

This is a really fantastic strata that is also low in fat. If you want it to be high in fat add more cheese and use butter to toast the bread. Cream can not hurt in the broth either.

I used a mixture of rye and whole wheat bread but flax seed and ten-grain torpedo are good alternatives. The recipe below is adapted from Piatto Unico: When One Course Makes a Real Italian Meal.

Coat bread cubes in 1/8 cup Romano, olive oil, salt and pepper. Toast in an oven at 275 degrees until lightly browned and dry, about 30 minutes, stirring occasionally. Spread toasted bread into a greased 9×13 baking dish. In a large saute pan melt butter and saute onion until dark golden brown. Add cabbage and saute until it begins to caramelize. Pour in the wine and deglaze pan. Cook mixture until all liquid is absorbed, then spoon vegetables over bread cubes. Whisk stock and eggs together until frothy, then add oregano and half the parsley. Pour mixture over bread and let set in the refrigerator for at least two hours, but overnight for best results. Top with cheeses and remaining parsley, cover with foil and bake at 375 degrees until bubbly. Remove foil and bake until top begins to brown, about 15 minutes. Serve hot.

This blog attempts to collect some of the things I try to create with food and booze. Sometimes I succeed and sometimes I fail. My hope is to entertain and maybe help people think a little harder about what they decide to eat and drink.
View all posts by Rufus' Food and Spirits Guide →
This entry was posted in Breakfast, Food, Italian, Recipes, vegetarian and tagged casserole, healthy, strata, vegetable. Bookmark the permalink.