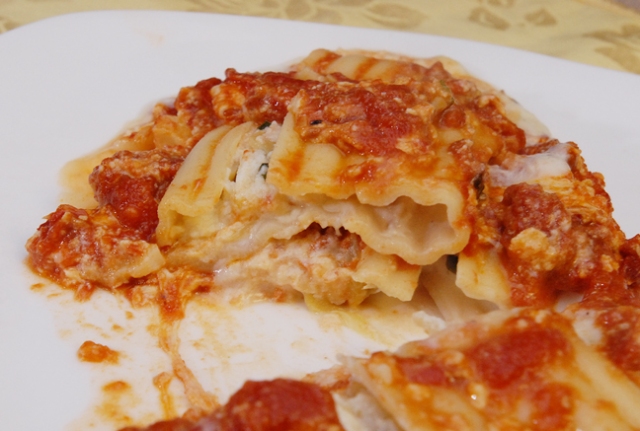 Manicotti, much like lasagna, can be filled with just about anything. I prefer to go vegetarian and make it slighlty healthier, but it really does not make much of a difference with all the cheese.

For this manicotti I used king trumpet mushrooms for their meaty stalks, but any fancy mushrooms will work. It also is a good idea to use artichoke hearts from the deli instead of ones found in a jar but as long as they are packed in oil it will be OK.

Mix ricotta, egg, artichoke hearts, romano, and basil. Season with salt and pepper. In a frying pan heat 2 tbsp butter and fry garlic for 2 minutes over medium heat. Add mushrooms and cook until the have realeased their liquid and begin to brown. Let mushrooms cool then add to ricotta. Let filliing sit in refrigerator for at least 2 hours. Cook shells in boiling salted water until al dente. In a large baking dish spoon 4 tbsp sauce on the bottom. When shells have cooled stuff with cheese mixture and place on marinara. When all the shells are filled cover manicotti with remaining sauce and then with mozrella. Bake at 365 degrees for 30 minutes. Let manicotti sit for 10 minutes before serving.

This blog attempts to collect some of the things I try to create with food and booze. Sometimes I succeed and sometimes I fail. My hope is to entertain and maybe help people think a little harder about what they decide to eat and drink.
View all posts by Rufus' Food and Spirits Guide →
This entry was posted in Dinner, Food, Italian, Restaurants, vegetarian and tagged baking, cheese, fancy, heavy, stuffed. Bookmark the permalink.