Twelve Days of Christmas: Gingersnaps You Can Drink 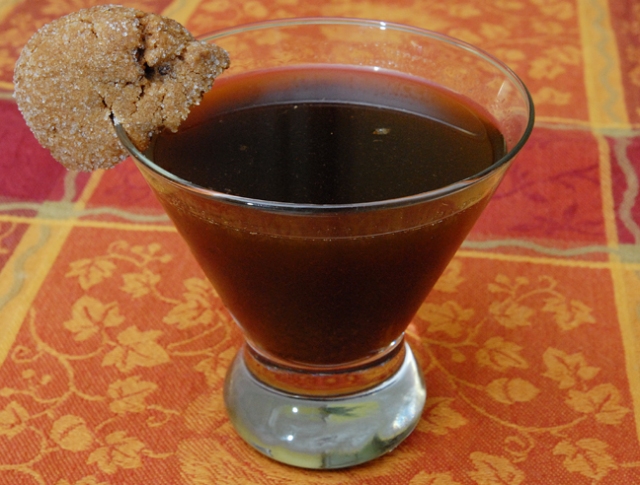 Hey who broke out the fall place mat?

We wanted to make gingersnap martinis, but found some recipes that called for simple syrup and molasses puzzling. Does molasses blend well when cold? Isn’t its progress supposed to be severely inhibited by ice? We didn’t bother finding out, instead just making a simple syrup with molasses. We also found that fresh ginger was too subtle so we broke out the ground stuff. It was like a cold cookie with a kick.

Check out Gourmet Veggie Mama’s gingersnap martini too. She use ginger-infused vodka and molasses, so it must work!

Combine all ingredients in a saucepan and bring to a boil, whisking to incorporate spices. Remove from heat and let cool before using in a drink. Store any leftovers in the refrigerator.

Combine all ingredients in a shaker filled with ice. Shake to mix, then strain mix into a martini glass.

This blog attempts to collect some of the things I try to create with food and booze. Sometimes I succeed and sometimes I fail. My hope is to entertain and maybe help people think a little harder about what they decide to eat and drink.
View all posts by Rufus' Food and Spirits Guide →
This entry was posted in Dessert, Recipes, Spirits and tagged cocktails, entertaining, ginger, holidays, liquor, martini, mixed drinks. Bookmark the permalink.

15 Responses to Twelve Days of Christmas: Gingersnaps You Can Drink