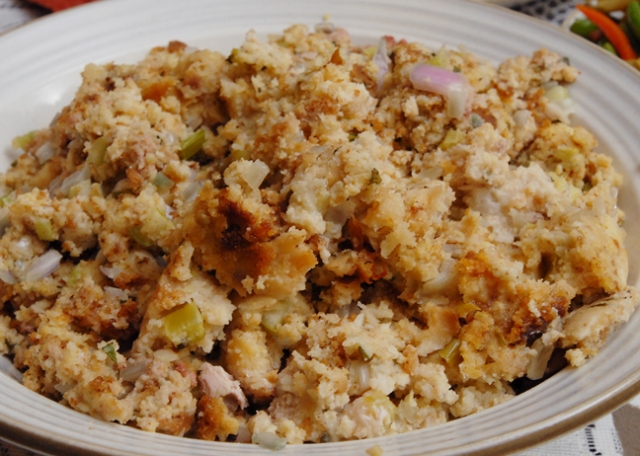 Of course Katherine's stuffing is the best

Our first Thanksgiving together, I made something very clear to Greg. I didn’t care whether we had pumpkin or pecan pie, how the cranberries were made or what he did to the green beans. But there was no way, no how, I would eat white bread stuffing. I called my Southern parents to get the family recipe. My dad said to take some cornbread and biscuits, dry em out, crumble em up, add some chicken broth, some sage, salt and pepper, and onion stir ’em together and shove it all in a bird for the stuffing. Take the leftover, throw in an egg a little more broth and put it in a pan for the dressing. He didn’t have precise measurements; neither did mom. My first attempt wasn’t the greatest, but I’ve improved and Greg quickly became a cornbread stuffing convert.

A year later, we flew to Germany for Christmas to see his family. His mother, who I’d be meeting for the first time and I’d like to say upfront is a wonderful cook and a great lady, asked if there was anything I didn’t eat. I drew a blank and muttered liver and onions. Well, wouldn’t you know it, one night for dinner there was a whole bloody, mushy mess of white bread stuffing staring me in the face. I scooped up cauliflower, which I also disdain, and put some of the white bread stuffing on my plate.

Greg took a look at my plate and in his only speaking volume, loud, said “You don’t have to eat that.” Then he proceeded to tell the table how I loathed white bread stuffing. On the bright side, it’s never been featured in a family meal I’ve attended since.

When we moved into our house a few years later, we had friends over, both of whom grew up in Alabama. By then I’d really gotten the whole Southern stuffing down and was so proud to break out the cornbread stuffing. I was in the South making a real Southern dish for real Southerners. Much to his wife’s horror, our friend took one look at it and asked what those white things were. When I said biscuits, he shook his head. Stuffing and dressing should just be cornbread and some meat. He took a bite, frowned and in that thick Alabama accent of his declared the texture was all wrong. What can I say, sometimes karma’s a hick.

When I told my dad what happened he reminded me that the part of Georgia he grew up in was practically in Alabama. The South is a big place and there isn’t one right way to make stuffing, he said. I disagree. This is definitely the right way.

Cook biscuits and cornbread two to three days before you plan to make the stuffing. Allow to cool, then crumble the breads in a large bowl to dry out. Some large chunks are fine. (We normally put the bowl in the oven, and make sure to pull it out if we need to cook something.) Mix the breads, sage, onion, celery, garlic and three cups of the broth together. Season with salt and pepper. I tend to use less salt in this stage because we have an herb butter in the turkey and the butter has salt mixed in. The meat drippings and the butter mix with the stuffing as it cooks. The mix will be wet, but should still be a bit crumbly too. Stuff the neck and body cavities with as much of the stuffing as you can. Cook the bird as you normally would. For the dressing, add the rest of the broth and the egg to the remaining bread mix. Stir to incorporate. Season with salt and pepper to taste. The size of the pan you need will depend on how big the bird was. You’ll want the dressing to be about an inch to an inch and a half tall in the pan, so a 2 1/2 to 3-quart casserole dish would work well for a larger bird. Make sure to grease the pan and smooth the dressing into the pan. Cook for about 45 minutes at 350. The edges should be crisp and the top golden.

This blog attempts to collect some of the things I try to create with food and booze. Sometimes I succeed and sometimes I fail. My hope is to entertain and maybe help people think a little harder about what they decide to eat and drink.
View all posts by Rufus' Food and Spirits Guide →
This entry was posted in Dinner, Food, Recipes, Sides and tagged baking, biscuits, cornbread, family recipes, holidays, southern, thanksgiving. Bookmark the permalink.