My wife’s mission to make me the perfect macaroon continues… but at what cost?

The oven caught fire the last time I tried to bake macaroons. Perhaps the cooking gods are telling me to leave these sort of things in more capable hands. I defy them.

The light show started before I comprehended what I was seeing; a flickering that grew brighter in the shadows of the darkened kitchen as I watched from the couch contemplating the source: A neighbor’s porch light? An idling car? By the time I went to investigate, the latest macaroons were a lost cause and our oven’s heating element was burning out in spectacular fashion, a single flame sparking and shooting its way down the left side of the filament. A lit dynamite fuse charging toward ignition. We pulled the unbaked cookies and closed the oven door, quickly. Drawn to the fire, we sat on the kitchen floor to watch our money burn, all the while hoping that ovens really are built to contain fires.

The aftermath was, thankfully, anti-climatic. The element was toast. The replacement part would cost $78, with shipping. Not exactly chump change, but our oven wouldn’t need to be replaced. Still, we wondered, could the macaroons be salvaged?

We have several friends in the neighborhood who would gladly let us use their ovens and could easily be paid in cookies. But, there was one little problem. I’d picked a recipe that yielded four cookies. (Why waste ingredients and calories on an unknown?) Calling a neighbor at 8:30 at night to use their kitchen and making off with all the cookies seemed stingy. Besides, I was in my pajamas.

So we improvised. Since our broiler worked, we put the cookies on the top rack and waited for them to brown. When we pulled them out about 10 minutes later they were closer to blackened and still quite moist on the inside. Not the appealing sort of moist, but the this-egg-white-better-not-give-me-salmonella sort.

Greg took a bite to be kind. Too much coconut, he said, not enough dough. Even if they had been cooked properly, he said, they wouldn’t have been the recipe we were after.

His mother has passed on her tried and true recipe. We hope it will make the mother of all macaroons. If not, at least they’ll be cheaper. 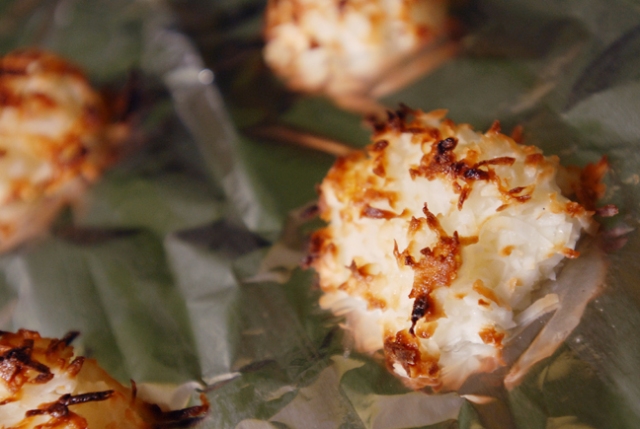 Broiling did cook them enough

Here’s the recipe we found on Epicurious, from Gourmet. One bright note, the almond extract gave the coconut a nice sweetness and is a combination we’d try again.

Put oven rack in middle position and preheat oven to 300°F. Butter a baking sheet, then line with foil and lightly butter and flour foil, knocking off excess flour.

Stir together egg white, sugar, vanilla, almond extract, and a pinch of salt until combined, then stir in coconut. Divide coconut mixture into fourths, then drop in 4 mounds (about 2 inches apart) onto baking sheet.

Bake until tops are pale golden in spots, 15 to 20 minutes, then carefully lift foil with cookies from baking sheet and transfer to a rack to cool completely, about 15 minutes. Peel macaroons from foil.

This blog attempts to collect some of the things I try to create with food and booze. Sometimes I succeed and sometimes I fail. My hope is to entertain and maybe help people think a little harder about what they decide to eat and drink.
View all posts by Rufus' Food and Spirits Guide →
This entry was posted in Dessert, Food, Rants, Recipes and tagged cookies, macaroon. Bookmark the permalink.

12 Responses to Our $78 broiled macaroons